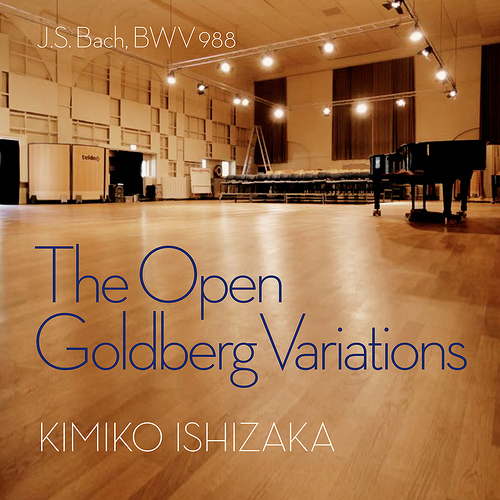 This is a new recording of J.S. Bach’s Goldberg Variations, BWV 988. Recorded by Kimiko Ishizaka on a Bösendorfer 290 Imperial in the Teldex Studio, Berlin, produced by Anne-Marie Sylvestre, this recording is the first fan-funded, open source, and completely free recording ever produced. Every part of it is free for you to use, share, and copy. via Open Goldberg Variations Project

Below is my slightly modified message-review that I had sent to Kimiko on May 29, 2012 (one day after release).

I just have added link to your recording to my "Short Review of Bach Music for Beginners" (Russian-language page): http://bagira.hut2.ru/bach.htm

Performance
-----------
I'm not musically educated at all, but I have listened well over 100 recordings of Goldbergs on different instruments and have some opinion and tastes.

There are some "check points" in Goldbergs, and I quickly listen new recording at these points to determine — whether new recording is interesting for me to deeply investigate. Goldbergs are fully "ok" for me only after several full listenings and if all will be fine for me then I will listen this recording in future.

1. Transition from Aria to 1st Variation: no abrupt rush from slow Aria to 1st.
You are fine here!

2. Variation 6th: some pianists here produce such "sound massive" and play in such fast tempos that I hardly can distinguish separate notes and voices.
You are fine here!

3. Variation 8th: here I compare with finest Evgeni Koroliov rendition (1999). I cannot say scholarly, but he plays some notes with specific "charm and lenghtening". Maybe this "behaviour" is written in notes, I cannot read score, but I own Kirkpatrick's edition from 1930s just for metaphysical reasons though I not understand them.
I hear some "charm and lenghtening" in your recording!

5. Variation 19th: no fast tempos here. Very intricate interweaving of voices for me. Rosalyn Tureck (1998) is ideal here.
You are fine here!

7. Beginning of 29th Variation: no extra-loud notes at the very beginning. Sadly Angela Hewitt in both 1999 (studio) and 2009 (concert) recordings here produces very loud notes.
You are fine here!

I want to specially note that Glenn Gould breaks mostly all of my "check points" in all of his recordings.

Also I do not like neither extra-embellishments (Alexander Paley, Piano, 2004 and Ottavio Dantone, Harpsichord, 2003) nor playing without embellishments at all (Wilhelm Kempff, Piano, 1969 and Lechler, Eisenlohr, Piano Duo, 1986).
You are fine here!

2. Trills in 28th have some points of non-acceptance (maybe word "weak" suitable here?) for me.

I certainly will relisten you recording with eyes closed.
Thank you!